The Blackjack game I have developed is designed for a Windows PC.

Show how this game can be converted into a mobile game to work on either a iPhone (5/6) or a high spec Android phone (using 5 inch display min).

The HCI needs that a Android / iPhone game game has against a Windows game.

Specifications of the test Android phone that I intend to work with: 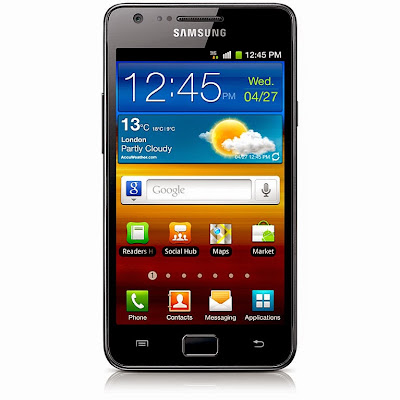 For the purposes of this task, the above phone should be more than adequate. The screen size is of a good standard and the CPU / GPU should be easily able to handle the graphics and sound.
However in terms of predicting problems, I estimate the following:

On screen graphics elements such as the player icons may need to be removed in order to create less clutter. I will have to see how it looks onscreen, but this is certainly a possibility.

Sound file formats may need to be researched - if the MP3 format I intend to use turns out to be wrong, I will need to find another.

Game Maker GML coding to address the issue of the difference in screen size.

Re sizing the screen or room to fit an application's display


I will almost certainly need to resize the game room from it's Windows PC size of 1024 x 600 to well under half that (I estimate 480 x 300 pixels). The same goes for all instances of sprites and objects - they will need to be significantly smaller. However, I have discovered that there is a GML command that may do much of the repositioning work for me:


This task can be achieved using the Draw GUI Event :

The Draw GUI event in Game Maker falls under the category of Draw Events and is for the use of drawing Graphical User Interface elements that are not affected by the viewing scale or position. This means that with one instance of the Draw GUI event, all of the elements that you need for your HUD can be drawn without you having to base all their positioning on the position within the room.

Example - If I draw a health bar on a scrolling platform game, it will remain in the same place on screen even when the screen scrolls in the view port. It's position is set independently to the other objects in the room. It will move with the view.

There are a number of things that the developer must also bear in mind:

Re sizing the sprites to fit an application's display

The secret to this lies in the initializing of the Draw GUI event. Without a certain GML command, the HUD elements and sprites will not scale in relation to the view port. The way that we can get the elements to re size is by adding this in the Draw GUI create event:

To reiterate the difference:

The view is how many pixels it takes up in your game (screen resolution).
The port is how large the available playing area is on screen.

Altering controls for how the game plays on a given platform.

The target application for a game may require a different user interface to a Windows PC. Windows PC games use mouse and keyboard commands as this is the standard for navigating around the screen and interaction. Touchscreen devices use a different method - as user input commands are carried out via thumbs and fingers, invisible virtual keys will need to be put into place. Upon touching these virtual keys, similar inputs and interactions can be carried out as they would with mouse and keyboard.

Virtual keys can be created in game maker with the following code syntax:

In short, the virtual key command allows the user to map various areas of the screen to keyboard events.

Interestingly, from a developer point of view, virtual keys can also be used to show, hide and delete variables. Game Maker automatically removes these keys when changing rooms.

The position of virtual keys is related to the screen position rather than the room position, so the x/y values are absolute on the screen.

Virtual keys and any sprites associated with them can be defined in the Draw GUI event of an object.

Before the developer can begin to build and test a game, it is advised that they take certain steps to make sure Game Maker and the Android device can communicate correctly. Game Maker works with by default with Android 2.3, and above which covers most of the devices that are in use at the moment.

Finally, the user will also have to install the JDK (Java Development kit) since this is the scripting language that enables Android and Game Maker to communicate. After installing all of these development kits, we can turn to setting up a device for Android.


Upon successful installation, the Android SDK should look like this: 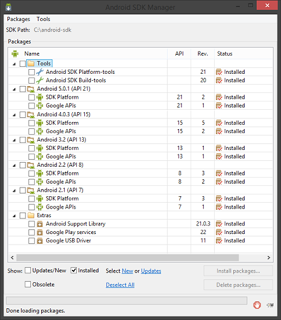 Setting up Game Maker for Android use

Once the Android SDK is correctly installed, launch Game Maker Studio and do the following:


Device Setup For Android
It is essential that the Android device (or devices) that the developer is using with GameMaker: Studio are configured to work properly with the software. Below are the steps to follow to ensure that there are no problems:

Connecting the device
Connect the Android device to the PC via the data cable.
The device drivers should be installed automatically at this stage (if they aren't already), but if they are not, the developer should refer to the device manufacturer's support information to locate and install the correct ADB drivers. It is very important the developer gets ADB drivers, not the standard consumer ones.

Note: The ADB driver stands for 'Android Debug Bridge'. It is a command line tool that allows the user to communicate with an Android device or emulator. It is a client-server program that consists of 3 components :

Now test the phone driver to confirm if it's correct.
If the developer has already set up the PATH variable as mentioned above, simply Windows Key and R to open a new Run window and type "cmd" (no quotes) and hit enter, then type "adb devices"

Go to the Android install folder and then the "platform-tools" folder inside it (e.g., C:\android-sdk\platform-tools) and then hold down the shift key and then right-click in some empty space and choose "Open a command window here". In the new command window, type "adb devices" (without the quotes).

After installing all of these applications on your PC that runs Game Maker, we can now turn to that particular program itself.

On Game Maker, take the following final steps to prepare development for Android: 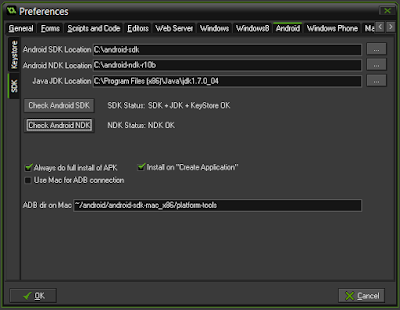 The first 3 fields should have filled themselves in automatically. 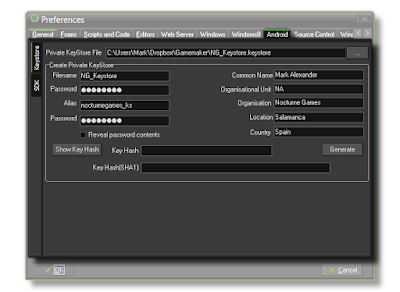 The next step is to create the private Keystore by click the 'Keystore' tab, which can be seen on the left in the screenshots. The Keystore is a file that will be used to 'sign in' all Android devices. Is is advisable that the user fills in this file correctly and then backs it up by making a copy. The Keystore file will require the following information:

Testing the game
Once the developer has completed these steps, it is a simple process to test a Game Maker game on an Android device. The first step in this process is to make certain that the Android device is connected to the development PC running Game Maker, either by USB cable or WiFi.

To connect via a USB data cable

To run via a WiFi connection

To test the game on an Android device with a WiFi connection, the developer will need to make sure the YoYo games runner is installed on the device. According to the YoYo games online documentation, this can only be achieved via a data cable connection. This means that the developer must follow the 3 steps data cable connection at least once before any WiFi connections will work. The runner is basically a small program that can interpret data that is sent to it via wireless connection. With success, the Android device can then run the game.

Once the runner is installed and working:

How I implemented these factors into my game 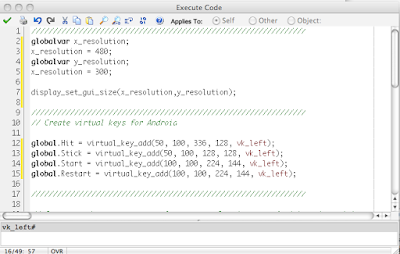 As you can see, I added in vk_left to the keycode. I also made sure to add this second key command into the bulk of the game code. For example, where an event was triggered by using mb_left (left mouse button), I made sure to tell the game that I wanted the same event to be triggered if a virtual key was pressed.

In terms of sound, my initial instinct was correct. MP3's are the most appropriate file format for an Android phone.

In terms of resizing, you can see how the game HUD is quite spacious anyway, with an emphasis on the cards and scores, rather than large superfluous graphic elements. With this in mind, you can see from these screenshots how the game will translate from PC monitor screen to mobile phone:

Blackjack game as it would appear on an Android phone

I found that the sprites for the 'Stick' and 'Hit' buttons needed to be bigger, and as such I needed to increase the size of the virtual keys. This is so people's thumbs and fingers could trigger the events easily without having to fumble around on the screen.

Creating a game for play in a web browser rather than a mobile is a significantly easier task.

To achieve this the developer will need the Professional Edition of Gamemaker Studio. From here, the developer should change the “Target” from “Windows” to “HTML5”.

In order to create my game for the web,  I followed these simple steps:

In this newly created folder the developer is given three files - HTML5GAME, FAVICON and Index (a similar file structure to a website). These folders hold the complete game and provide the option to open it in a web browser. By right-clicking “Index”, the developer is given several options but the option needed to open up the game on different web browsers is “Open with”.

By clicking this the developer is given the option to open their game with a different web browser. These browsers include Internet Explorer, Google Chrome and Firefox.


Pros and cons of browsers in conjunction with Game Maker games

I ran some small tests to decide what browser I should develop for and discovered a number of pros and cons:

Internet Explorer
This browser is somewhat antiquated and not really designed for use with Game Maker games. The developer can expect to encounter the following:

All of this severely diminishes the user experience of playing the game. I have discovered that Google Chrome is better in some respects and just as bad in others

Firefox
However, unlike Chrome and Internet Explorer:
I felt that Firefox offered the best choice as a web browser platform, so I will attempt to

develop a finished version of the game for that. As it will be mouse driven, their is no need to 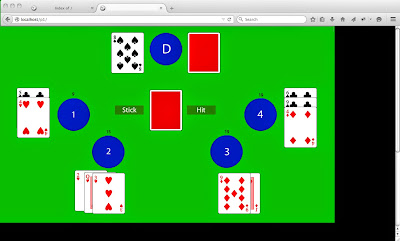 Task 3) Publishing the game onto both platforms

Although my game is buggy and unfinished, this is how I intend to publish the game on both mobile and web:

To publish my game onto an Android device, I will use the same ‘Create an application’ tool that I would use to publish my web based game. I must make absolutely sure that I have connected my Android device via USB cable. All being well, the game will upload onto the Android phone.