Synopsis
The overview for my zombie game is the story of a young mage who has escaped into the hills after a zombie attack in her city. There she discovers a dried up lake, surrounded by impassable mountains and home to a strange city made of shipwrecks. The area is infected by the same zombies who have overrun the mage's city. Investigating further, she discovers evidence below the city of an archaeological dig for a strange artifact. To protect itself, the artifact has released a deadly parasitic organism into the water that has infected the surrounding area, and the nearby city. Anything that requires water to survive has been infected, turning them into a zombie The mage must find a way to stop the infection and escape the area.

The game is fantasy based, inspired by tabletop games such as Dungeons and Dragons and Warhammer, and video games such as The Elder Scrolls series. 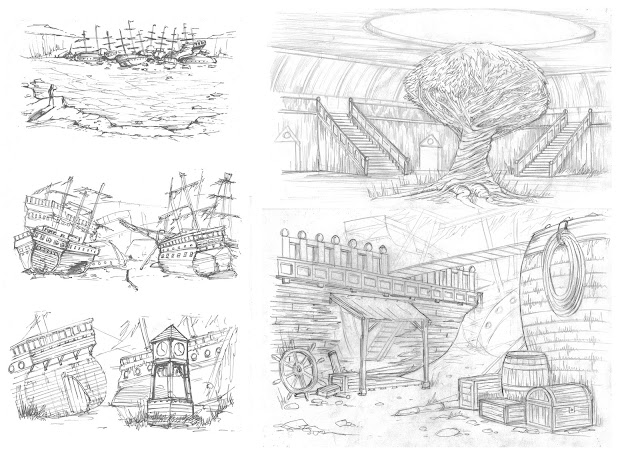 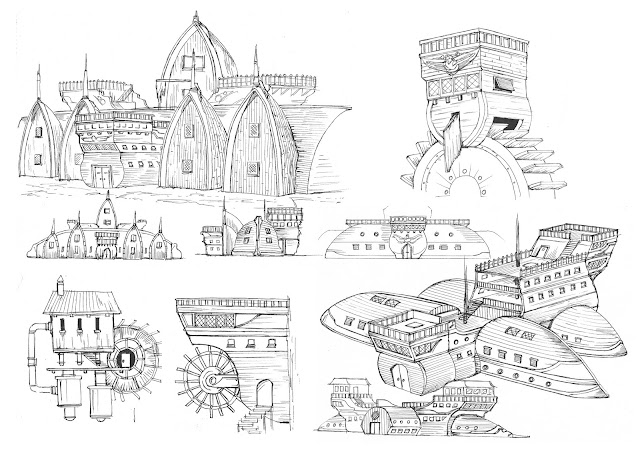 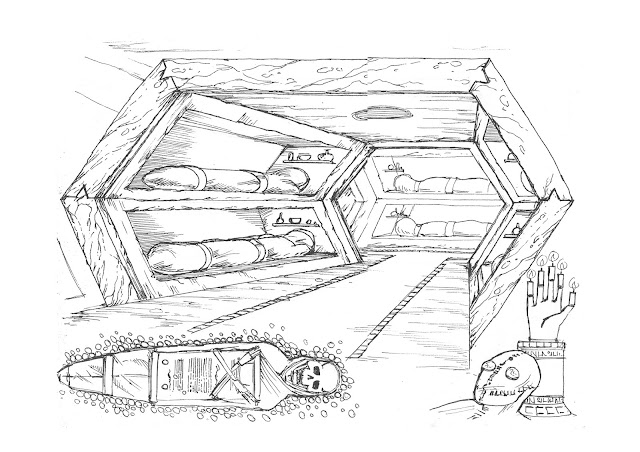 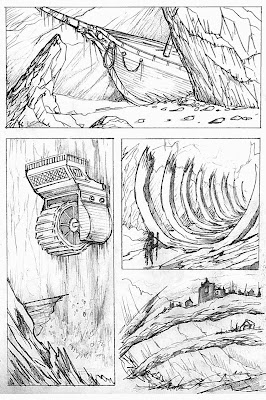 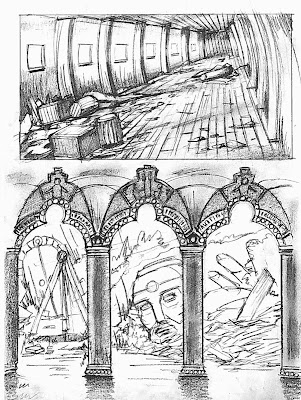 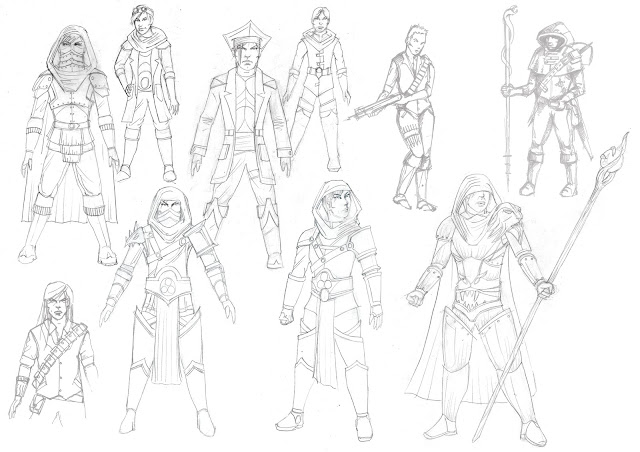 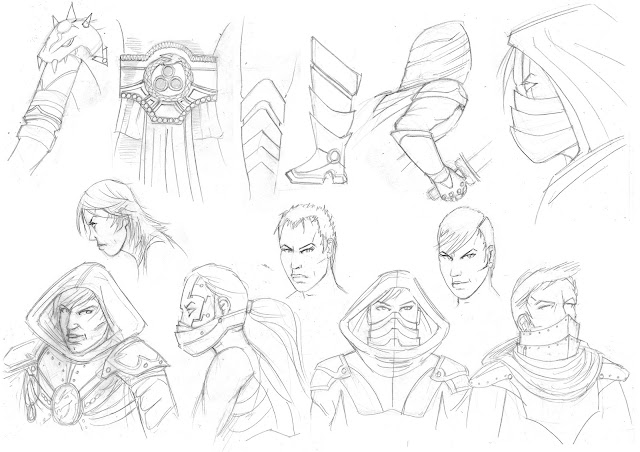 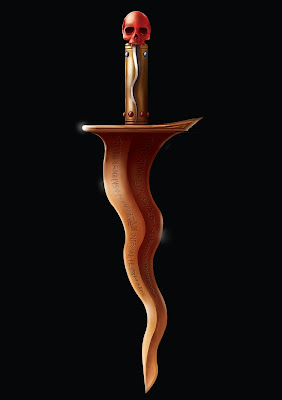 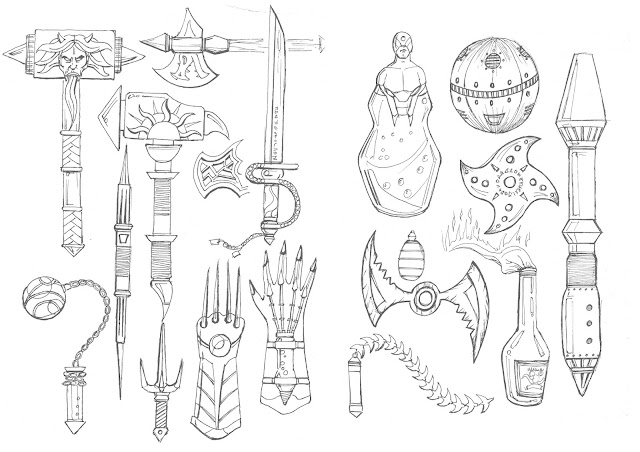 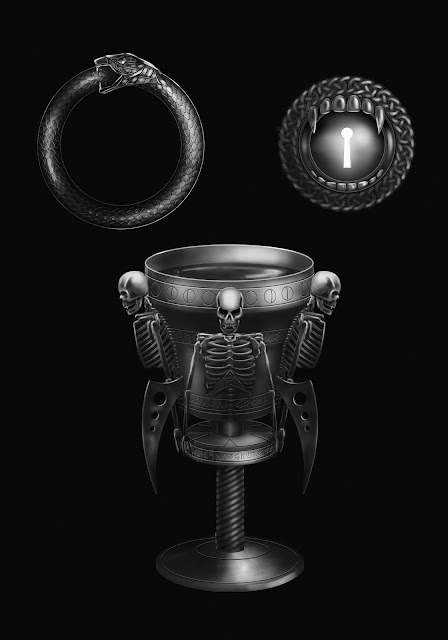 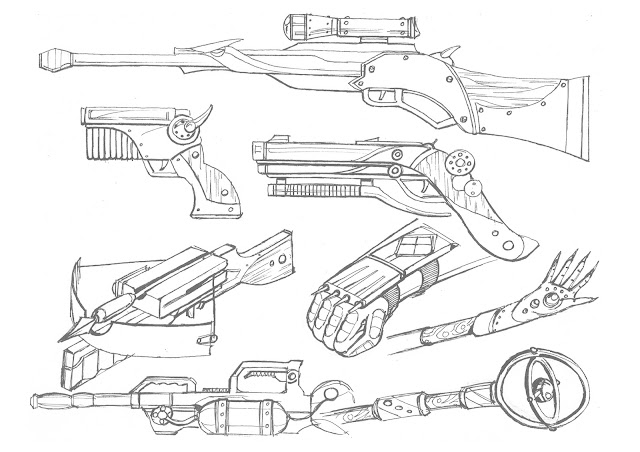 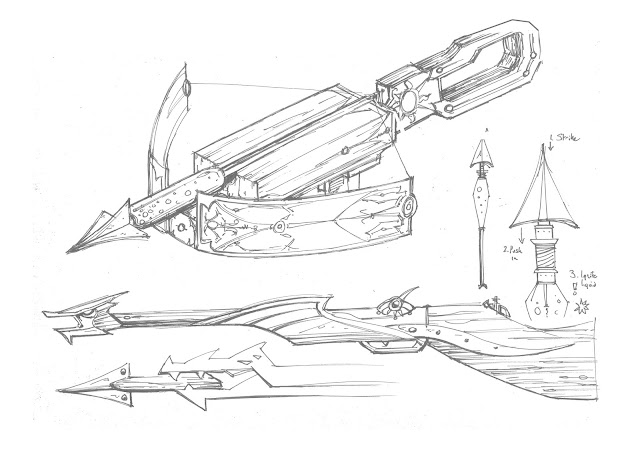 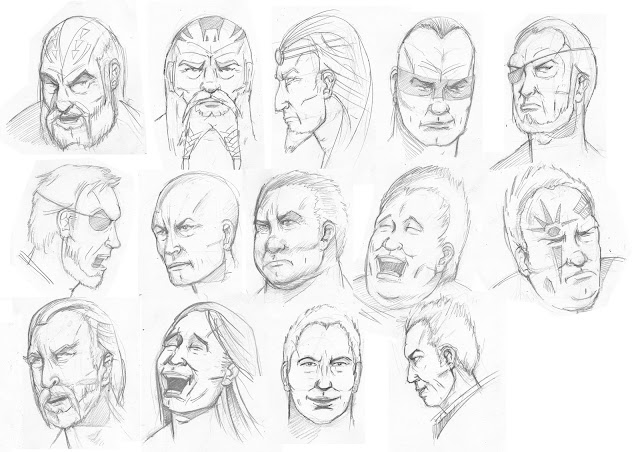 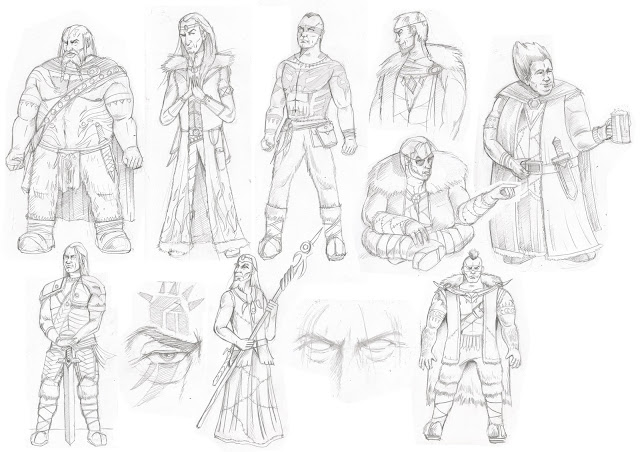 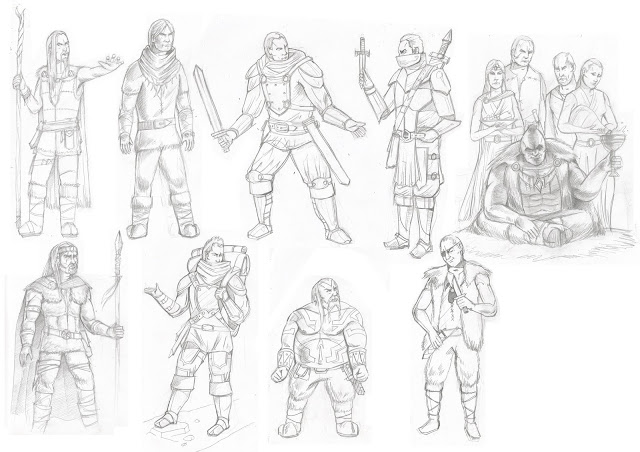 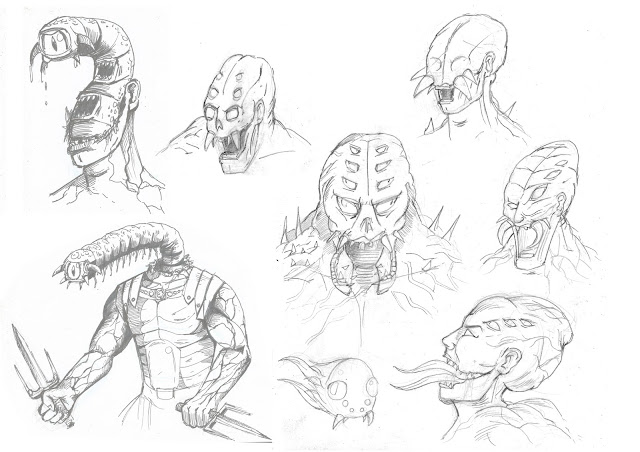 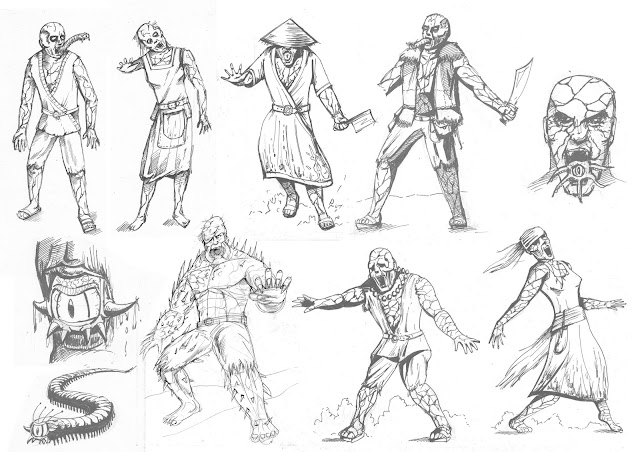 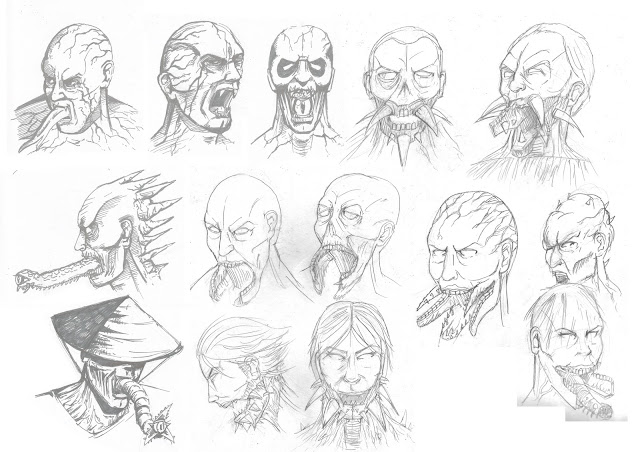 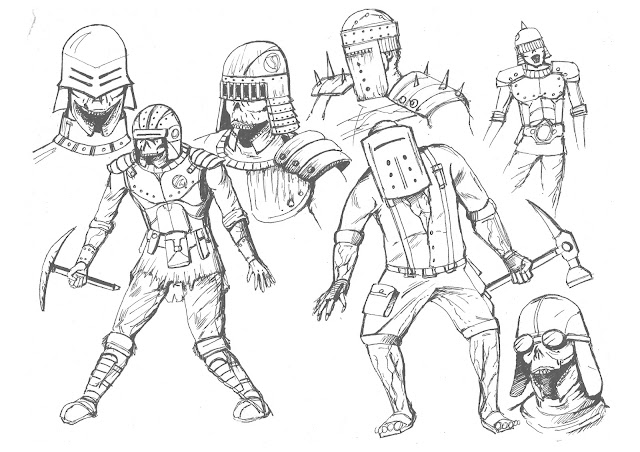 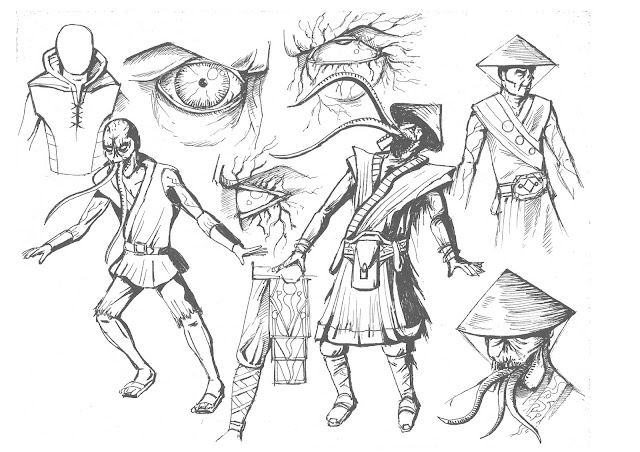 Client brief
The initial client brief was as follows:

"Imagine you are a refugee escaped from a city and headed into remote highlands. The zombies are everywhere and you want to get away from the city and the zombie hordes.


That's the game in essence.


A game that has 3 areas which are interconnected. Two of the rooms are to explore and the 3rd room contains the zombies (bots).


The first area is the largest and is set in an outside environment with landscaping and grass and some water features.


The Second room is a cave (or house / hut) in the landscaped environment. This is a fairly large area the player needs to explore and maybe find stuff.


The third room is access via a door in this cave or house and  has zombies in their which will will attack the player on sight.


Plan what you think you need for this type of game."


My own brief
What is the project?

The project is to create a short 3rd person zombie game. The game can have combat and puzzles but must feature at least a hero, two types of zombie and a boss zombie character.

Who is in the team:Charlie-AnneDaveWho is the team leader?
Charlie-AnneWho will do what?Charlie and myself work best pooling ideas, so have decided to work on all the elements together. However, there will be a definite set order in which we will approach the tasks:1) Design of main character
2) Design of weapons, objects and assets
3) Level map design
4) Design of first large main area 5) Design of standard zombies
6) Design of second area
7) Design of human survivors
8) Design of third area  9) Design of Elite / Boss Zombies
10) Sound effects and music

Gameplay outline
This is a fantasy game about a refugee who has escaped from a city and headed into remote highlands. Zombies are everywhere and the player’s character wants to get away from the city and the zombie hordes. They begin the game on the edge of a dried up ocean floor valley that is home to a strange town made up of shipwrecks.

The zombies have been created by millipede like insects that have come up out of the ground from a well shaft in the centre of town. They inhabit human bodies and take them over, turning them into dangerous hosts.

The player must collect the parts for an airship that will take them up and away, over the high cliffs that surround the town. What I will need
A hero character for the player
A standard zombie enemy
A type 2 zombie enemy, possibly some evolution of the first
A boss zombie who the player must fight at the end of the level
A 3D landscape set in highlands or a meadow, consisting of 3 separate areas:
Weapons, armour and collectable items
Sound effects
Music
Some screen or sequence that shows the finality of completing the level

How the game will workWe were thinking of setting the game in a fantasy rural location. The first area will be a large open dried up ocean, with peaks, troughs and crevasses. In the centre of the map is a town made out of shipwrecks.

Within the shipwreck town location there will be a manor house made of several large galleons. Within this the character can explore and interact with various objects and comprises the second area.
The third area involves climbing down a well shaft into an underground corridor network and treasury.

Within these locations the main character will have to collect each of the relevant parts to build a flying boat so that they can escape the area. Around the shipwreck town and the surrounding areas there will be different areas that contain different parts. Each part will be guarded by a various amount of zombies. Once the airship is ready to leave, the zombie boss will spawn in. From here you will have a limited time to destroy the zombie boss. If the player fails to do this, the zombie boss will destroy the airship restarting the game.

Location and setting
The first environment will be mountainous but barren with dry grass, rocky outcrops and coral. The floor will be a mixture of a baked, dried up riverbed, grassy areas and sandy patches. The buildings will be a village made of wrecked ships that have been deserted by their inhabitants, possibly due to the zombie threat.

The feel of the game will be very medieval and fantasy inspired.

What will I need to plan on order to begin creating the game?
I will need to meticulously plan the following first of all:Character, object and landscape concept designsLevel layoutsPlans for the puzzlesWrite a script for the dialogue
Devise attacks and how the controls, enemy interaction and gameplay will work.
Decide ways in which the players can progress, be challenged and have fun

Most of all….create something that we would want to play myself.

Who is target audience?The target audience is going to be slightly older teens (17+) to adults. This is due to a nature of mild horror being on display. My target audience is also this due to the fantasy setting - fantasy tends to be quite lore heavy and story driven and occasionally makes reference to darker themes. As a game that deals with a zombie outbreak and zombie combat, some bloodshed and violence is inevitable hence the more mature target.


Market research - audience / why
The audience for this game is both men and women of ages 18 - 40. This is because the game is of an occasionally bloody and violent nature so the minimum age for the player is 18. This would be in line with PEGI and ESRB ratings.
The themes and tone of the game are fantasy, swords and sorcery. This would appeal to teenagers and slightly older players who enjoy classic fantasy such as Dungeons and Dragons, Conan The Barbarian, Warhammer, Tolkien etc. I also want to appeal to the kind of older players who enjoy exploration and large open world games such as 'The Witcher', 'Assasins Creed', etc. These players tend to be slightly older as the plots deal with themes that require slightly more maturity.
Legal and ethical considerations

Copyright law
I must be aware of not reproducing or stealing anyone's work, either directly (consciously) or indirectly (unconsciously). All work must be of an original nature and based on ideas generated by myself.

Ethical, eg confidentiality, decency;
I must not disclose any work to any untrusted sources to minimize risk of plagiarism. Any outside talent I hire such as voice actors, designers, programmers  or artists must sign an agreement to say the same. I must produce a game that is of a socially acceptable standard, e.g avoid gratuitous swearing, sexual references, nudity, explicit language or content that is likely to offend.


Representation, eg race, gender, religion, sexuality
I would like to make a game that features men and women equally, portraying characters of different race, creed and social standing. Ideally they would be integrated into one community that would accurately reflect real world cities and towns. They should all have a role to play in the game, be they non player characters or characters that the player can interact with and receive quests from. They may well follow fantasy religions that involve fictitios gods or deities and these beliefs will give them a degree of depth that would mirror real life. Their sexuality isn't really an issue in terms of the gameplay as no reference will be made to it - it isn't relevant.

The main character will be a woman as I want to see a female surviving in a fairly fractured male environment. I think this would lend the game an interesting dynamic as often times zombie games have male leads. The woman will have magic abilities that will give her the strength to outperform men in physical tasks. It would be easy to go down the route of casting a man but might lead to a less exciting game. I think a woman surviving in male and zombie environments would be quite fresh.
Specification

Key visual themes - plot
The overview for my zombie game is the story of a young mage who has escaped into the hills after a zombie attack in her city. There she discovers a dried up lake, surrounded by impassable mountains and home to a strange city made of shipwrecks. The area is infected by the same zombies who have overrun the mage's city. Investigating further, she discovers evidence below the city of an archaeological dig for a strange artifact. To protect itself, the artifact has released a deadly parasitic organism into the water that has infected the surrounding area, and the nearby city. Anything that requires water to survive has been infected, turning them into a zombie The mage must find a way to stop the infection and escape the area.

Polygon count
Kept to a minimum per model in order to run on the college machines. Ideally, around 3000 polys per model. There will often be multiple models on screen at one so the polygons must be kept low to maintain a reasonable frame rate and smooth movement. Keep surface texture details to a minimum to aid this process.

Image resolution
72 dpi, screen resolution, would be acceptable.
Keep surface texture details to a minimum to aid this process.


For the entire game, 5 - 10 GB will be acceptable to fit onto the hard drives. Most of the output size will be taken up by the landscape.

File size
Each polygon file will be around 1.5 - 2 megabytes.