Music for shoot em up game.

Genre – side scrolling military shooter (e.g. metal slug) reminiscent of old 1980's action films, full of gun violence, muscle and awesome catch phrases. Often focused around a lone soldier gunning through an army of enemy forces, similar to films like die hard, Rambo, Robocop etc. Furthermore, these game are extremely patriotic often showing America to be a superpower fighting for good using the power of bullets and explosions. The sound of marching drums, brass sections and military call outs are used again to add to this patriotic feel and get you in the mood for kicking some Russian ass. The music is usually fast pace, exiting and atmospheric, creating a sense of action and danger.

The default platform for this genera of game is coin-op but recently they have been transitioning onto console and PC platforms removing a lot of the limitations on the formats of sound. As the graphics of these games have stayed true to original 2D retro design they have kept the sound in the same retro style. I imagine the sample rates wouldn't be amazingly high as the sound clips do sound quite choppy and distorted.
https://www.youtube.com/watch?v=bjTKocFvX7U

Originally I think these games would have used mono sound as on a coin-op machine this would have been the norm but now days they would use stereo sounds. Stereo sounds would be able to simulate directions effectively in a 2d side scrolling game as there is only really two directions of audio, the left and the right, so only two channels of audio are needed.

Audio storyboard
The audio storyboard will be a sequence of images that have accompanying notes next to them describing where and why the music is introduced. In gaming terms this storyboard could give an indication of what will happen when the player is above ground, below ground, in an enemy base, in the wilderness, involved or boss fight,etc.The notes to the storyboard would probably cover ideas such as mood and atmosphere:

"eg: First level: Jungle environment - The hero is dropped into the level by helicopter and the music kicks in when his feet touch the floor. The soundtrack music for this level is designed to create excitement and anticipation."

Other examples on the audio storyboard could be:

"The player goes down a ladder to travel below ground. The music changes to become quieter and more subterranean."

or
"Player enters the boss area to confront a giant mechanical enemy. The music, melody and rhythm becomes more fraught and urgent as the battle takes place."

If the storyboard is in a digital format such as an audio demo on a Garageband timeline, the timeline may well be annotated to show what happens when in the level. This gives the listener of how the narrative unfolds via the music throughout the level.

File Storage
Music and sound effects are generally recorded on a portable device such as a multi or single track recorder or a computer application. These will be saved onto SD card as a high res sound files. These files are then transferred via USB cable, WiFi or card reader to the developer's working copy of the game.
The file storage for the music and sound will likely relate to a folder in the game's file structure. It is likely that music soundtracks will exist in one folder, while sound effects will exist in another. These may well be grouped into sub folders that relate to each level.
These folders will exist on the user hard drive if they have downloaded the game directly to their machine. If the game has been supplied on disc or cartridge, the files will exist on those storage mediums, again in a folder structure that can be read by the console.

Naming conventions
The naming conventions will likely be file names such as mp3, acc or ac3. These are all files that will be compressed to make them smaller but retain a degree of sound quality These will be referenced by the game's code.

Production Planning:
Planning the production of the music would involve making sure you have all of the necessary equipment and personnel to produce the piece. Ensuring that you have the relevant facilities to record sound as well as the relevant software to edit it afterwards is important to getting the piece right.

Quality Assurance:
Quality sound is essential to making sure the music or FX don't sound muffled or unclear. Quality assurance comes from using the right methods to record the sounds as well as saving it in the right file format.

The sound effects were recorded bu using things in our immediate environment or making noises vocally. We recorded the following:

We then went on to record some vocal effects, using phrases we felt may appear in-game:

We had a lot of fun recording these, often having to re record through bursting into laughter. When using the Dictaphone, this re recording process was simple and quick - just find the previous file, delete it and record a new one.

We then dragged each file into Garageband and manipulated it on a time line by adding effects. Our intention was to create atmosphere and a sense of what was going on in game through sound. Documentation of each process is below: 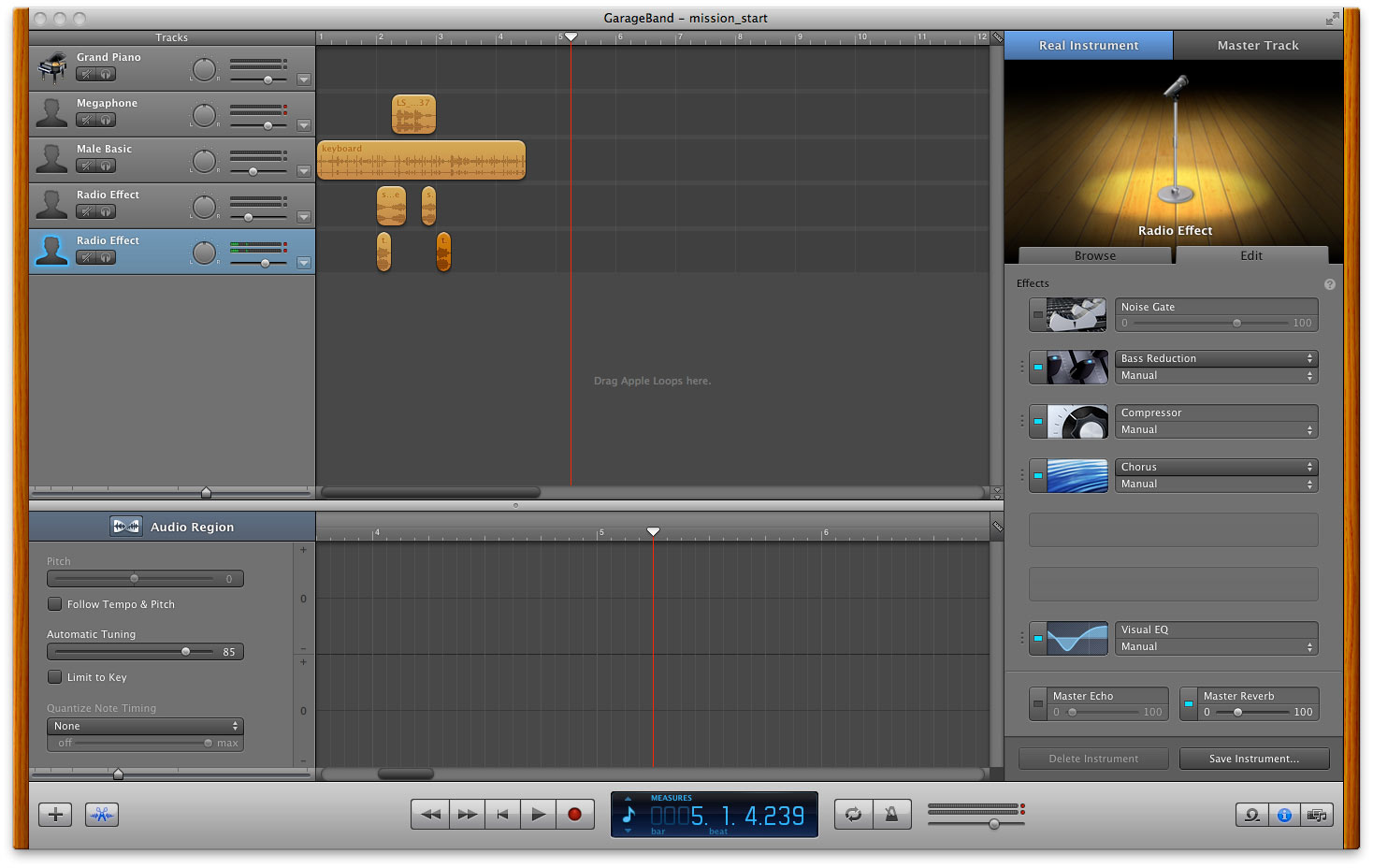 Above is a screenshot of our environment for the game. For each sound we dragged them onto the timeline and they automatically became a new track. This helped us to manage timings, the volume of each element and the length of each sound sample. Lengths could be altered by clicking and dragging the edges of orange highlighted samples.

We had the idea that in game, this sample could appear at the start of each level. There could be a tapping of a keyboard and the voice sample crackling through - as if orders were being sent by HQ.

To achieve this we dragged in the "Mission Start" sample. We then dragged in the keyboard tapping sample, followed by the paper tearing sample. The paper tearing sample was then duplicated. The reason for this was that we wanted it to mimic a radio crackle reminiscent of a walkie talkie, book ending the voice. Our next step was to add a significant amount of reverb to add a little drama and ambiance. Shuffling things around on the timeline got the timing right - keyboard tap, radio crackle, speech, radio crackle, finish.

We discovered in the radio effects menu that applying "Radio effect" to the crackles produced a small beeping noise. We really liked this as it sounded like morse code or a digital signal, adding to the military / combat feel.

To make the voice deeper, we added the filter "Megaphone" to make it deeper, booming and more imposing. 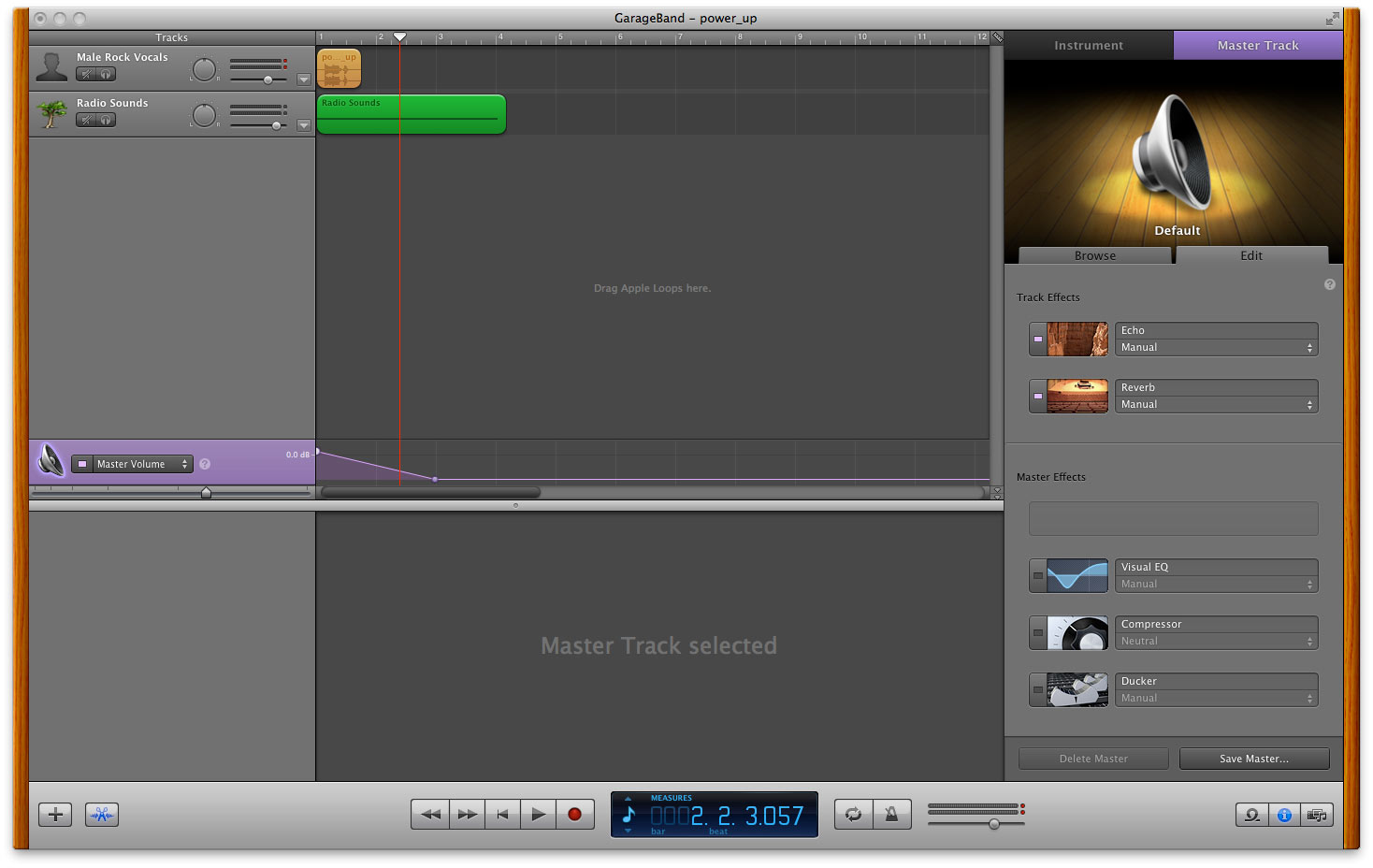 This one was quite straight forward - we took the speech sample and added "Male Rock Vocals". This adds a filter that sounds a little like someone talking through a mic at a stadium gig - slightly flat with little reverb. The clarity is good and the voice has some presence. We then looked in the Radio Sounds samples and found a really uplifting sound effect as if something is being switched on - there is fuzz and crackle, followed by a climbing, raising noise. We added a fade out (seen above in purple) to allow the noise to dissipate gradually.