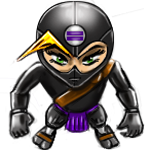 Here is the sprite for Brainbox the ninja, based on the concept sketches in the previous blog. It has been with certain things in mind - a bright flash of yellow to help the player see it on screen and above all a sense of personality.

I envisage Brainbox to be a bright, clever teenager - she is determined and brave but also a little rebellious, hence the shock of blonde hair showing through from under her ninja outfit.

This sprite was then expanded into back and side views to create more of an illusion of character movement.
Posted by blackhandzer0 at 16:14