What does the customer want?

Max gets score from collecting diamonds and from killing monsters. He has to collect certain items to unlock doors to progress to the next level. This is a platform game so I would expect Max to be able to jump over obstacles / monsters.

What does the design brief say?

The game play must be built around collecting diamonds and killing monsters. As a platform game there must be a mechanic in the game play to kill or avoid monsters.

Max has to collect certain items to unlock doors to progress through the game. This could be in the form of keys or any other form - this could be by completing mini side quests for non player characters. This might work well as introducing narrative into the game.

There must be some kind of score mechanic. Perhaps this could be linked to unlocking new areas.

In terms of weapons there must be some kind of upgradable weapon system - this could fall under the mentioned collectibles that the player must find - tougher enemies may not be able to be bypassed until the correct weapons are found.

Who is the target audience?

The target audience is the 7 - 14 age range. It could also feature game play that would appeal to families. The game play must be simple enough for young children to adapt to it, but intriguing enough for older players to discover hidden secrets. Families should be able to comfortably play it with their children.

It would also be interesting to make something that females would want to play. A challenge would be to make an action game that appeals and is challenging, but is not patronizing.
I am also still very interested in making something that plays like a retro coin op arcade machine to appeal to nostalgic players. These players are likely to be the ones with families buying it for their children. Retro games are very popular, even today. It would be good to make something that kind of spirit, but freshen and update the gameplay with some new features and ideas.

What sprites do we need?

As a minimum, we will need:

- A hero, 'Max'
- Various enemies
- Several background designs
- Textures for the platforms
- Diamonds
- Keys or items that will unlock the next level
- Non player characters to help and guide the player
- A boss monster
- Weapons and weapon upgrades

What sounds do we need?

As a minimum, we will need:

How many levels do we want?

What other elements do we want?

Ideally it would be advantageous to have:

- A start screen
- A how to play screen
- An ending screen

What do we want to do by the end of this session?

We have approximately four weeks to create this game.

How can we break down the tasks in making the game?

The tasks can be broken down as follows:
1) Design game play
2) Design sprites
3) Bring sprites into Game Maker
4) Make objects and platforms in Game Maker that interact with one another and create something that can be played
5) Implement physics for player, platforms and weapons
6) Implement score and collectibles
6) Implement a way to progress from level to level
7) Implement health and lives
8) Fine tune game play
9) Add in start screen
10) Add in end screen

A fun, bright sparky cartoon adventure in the spirit of old retro arcade coin op games. The game is set on a planet that is populated by trees that are miles and miles high. Everything is big and over sized. The tree tops are largely an unexplored area and are home to many races, cultures and creatures. Many of these have rarely been seen by men. On the ground, a gardener and his son Max, tend the plants and trees. It is their job to water the roots and flowers and maintain the plants and wildlife.

One day a large crow that rules the tree top kingdom swoops down and kidnaps the gardener, taking him back to her kingdom. It is up to Max to rescue him as he begins the ascent to the crow’s kingdom. Along the way he encounters friends and enemies, collecting power ups and discovering the truth about his father’s disappearance. The aim of the game is to travel through several vertically scrolling worlds until the two gardeners can be reunited.
The game will feature large, chunky sprites, imaginative backgrounds, fun power ups and a catchy soundtrack. It will be deliberately simple and not overtly violent. The game will instead focus on a cartoon, knockabout style of action like Mario or Zelda. Not to say it won’t be challenging at times – there will be levels and obstacles that will heavily test the players reactions.

The power ups will vary from simple gardening equipment through to spells and artifacts and inventions of ancient cultures later in the game. In fact each world will have its own specific objectives, obstacles and available power ups.

Here are some initial sketches of my game - my first thought for the hero Max, and a quick thumbnail sketch of a level layout : 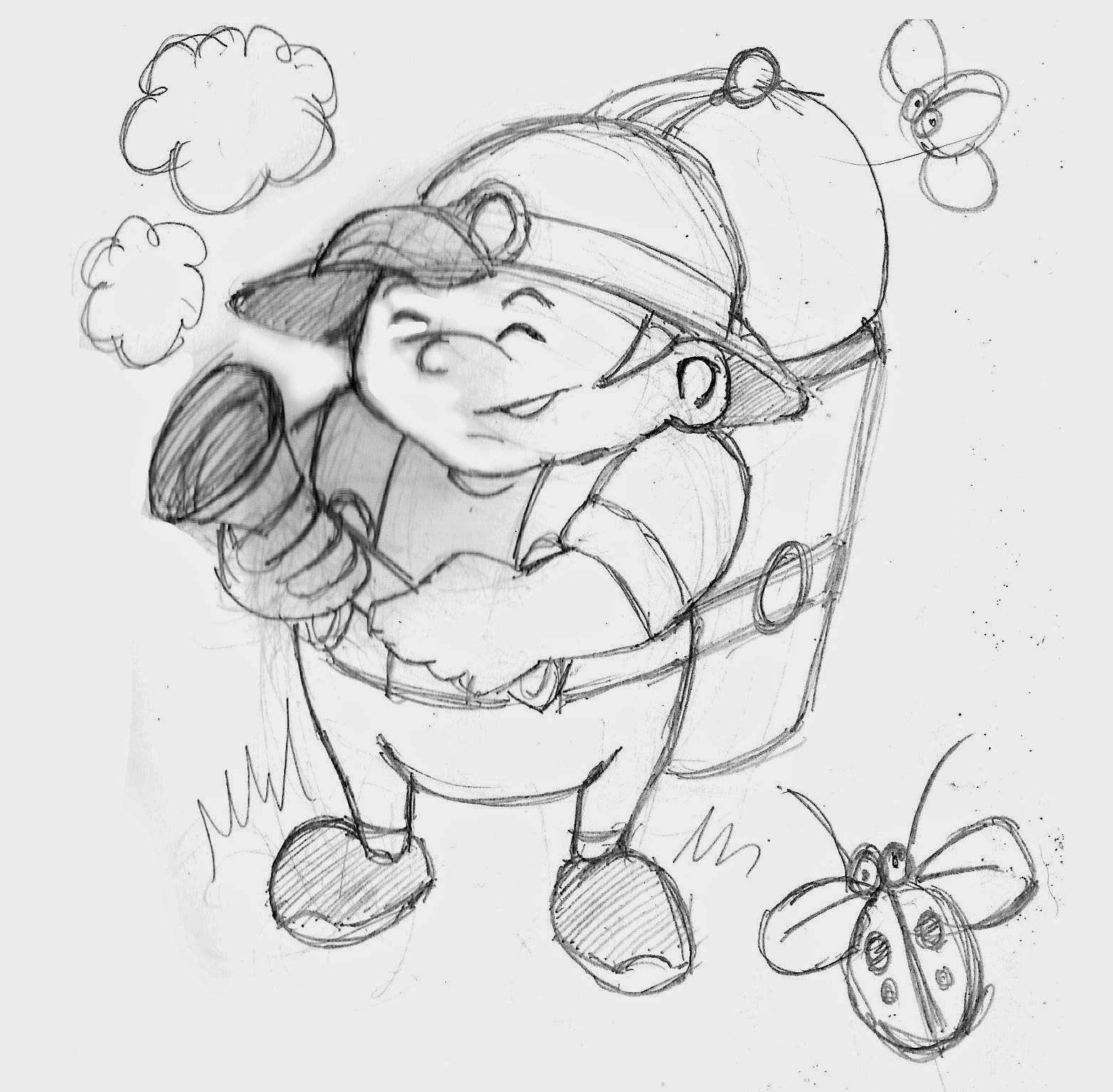 Max is a little boy who carries a large can of bug spray on his back. His enemies are all oversized insects and creatures found within nature. The bug sprayer effects can be altered by attaching different units on the top of it. The effects could be as follows:

- A standard bug sprayer to ward off enemies
- A freeze sprayer to stop them momentarily ;cools them down to freezing temperatures
- A fire sprayer to scorch them
- A seed sprayer that acts as a ranged weapon
- A reverse sprayer that sucks up enemies like a vacuum cleaner
- An air sprayer that blows away enemies and enables a boost jump.

You can see that the Max also wears a hat. He could collect different hats that grant different effects: for example, a propeller hat that enables flight. 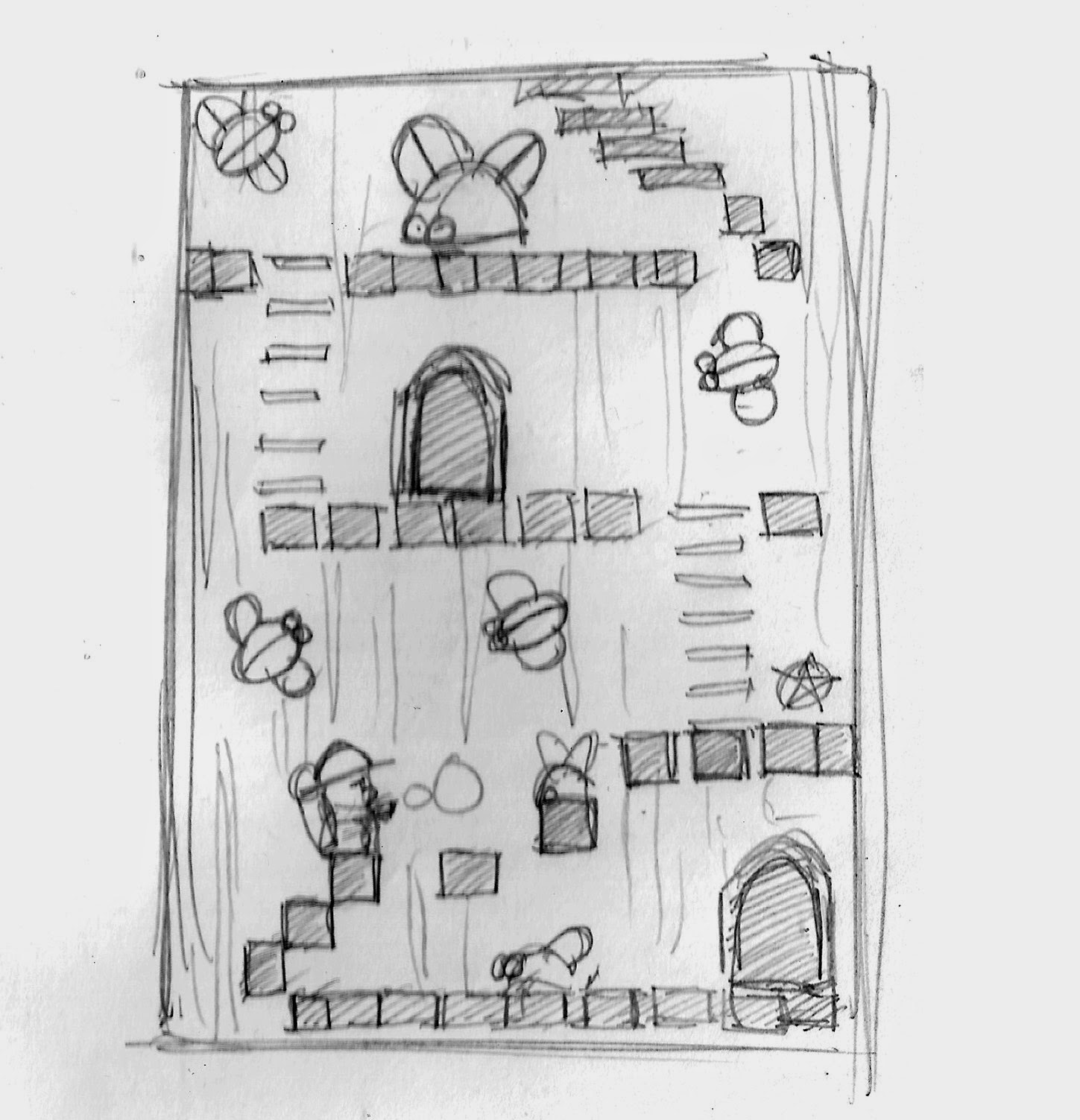 This is a small section of a level. You can already see there are plans for enemies, platforms, ladders and explorable areas of the map. These will create depth to the levels, hidden areas and secrets to find. Hopefully this will begin to create a depth to the game play that is more interesting than just going from A - B and stop the game being repetitive. I want there to be a reason that the player has to explore. Exploration and game progression should go hand in hand.

You can see more detailed mock ups of the levels in the next blog.